Minister of Energy and Natural Resources, Berat Albayrak, in his speech at the 1st Turkey Forum of Energy and Mine, said that in terms of Turkey, 2017 was a resounded year in a renewable energy.

Albayrak, who told that especially with new Renewable Energy Source Areas (RESA) tenders, both R & D activities, in which competitive prices have emerged, will be carried out and projects that support domestic production and employment have been realized, used the expression "We think that let US do the this year's RESAs in such a way that it would resound also in another field in the world."

Albayrak transmitted that works for new RESA tenders, which will be carried out within this year, have started and he told "We have started works for new tenders of 1000 megawatt in the solar and wind. Primarily, we are preparing the world's biggest off-shore project in the wind. We think that it will resound also in this field. We are also thinking about adding the regulation about battery storage to the solar RESA. It will be a hot summer again, and we plan to do two tender before the end of this summer.

"The riches in Cyprus are belong to the Cypriots"

Albayrak stated that energy diplomacy has a great influence on the foreign politics as well as on the economy.

Albayrak, voicing that effective politics in the Eastern Mediterranean and cleansing of the energy opportunities from the terrorist threat in the Southeastern Turkey are important steps, said:

"We are going to begin a very intensive land drilling along with cleansing of the mines that are on the border lines. There were regions that we could not enter. Moreover, in the Eastern Mediterranean, the status of Cyprus, the people in there are very important. It has always based on the politique de faite accomplie. In the region, one-sided policy has gone away by itself. The riches in Cyprus are belong to the Cypriots. Turkey has also taken up its position here. As long as a concrete and rational solution is not produced, we have to be active. If a one-sided drilling is done, we can not allow this as Turkey."

Albayrak, who made evaluations on Turkey's targets in the areas of mining and drilling, said that last year Eti Maden broke the record by the mine export with the amount of 2.2 million tons.

Albayrak, indicating that there will be significant developments also in the boron mine in this year, said: "As from this year, we are going to make important moves related to the boron mine. In this regard, we have built a team of experts who have worked in competent and important institutions in the world. This year we will make explanations about the groundbreaking process of two or three important facilities within the scope of transforming the boron into a value added and strategic product. Coupled with our domestic and national public defense industry company we will take resounding steps with a cooperation and a joint company."

"We put the signatures last week for the Mine Security Agency"

Albayrak, who said that Turkey's seismic detection ships have features which let them also to work in the mining industry, stated:

"We aim to reach a depth of at least 5 million meters in the drilling by 2020. Whole of Turkey's geochemistry map is about to complete. Geophysics is also about to be completed. Our companies are applying and getting permission, they are digging. In this whole framework, the forthcoming process will take shape by entering of our institutional groups into this sector. This year we will drill 2 million meters, in the next year we will drill 3 million meters and 5-6 million, and we will put more number and more kinds of mines on the market with our new mining model. Also for Mine Safety Agency we put the signatures as of the last week for institutional transformation in Turkey. I hope it is going to finish as of this month.  We are preparing infrastructure in order to move a sector from scratch to world standard. " 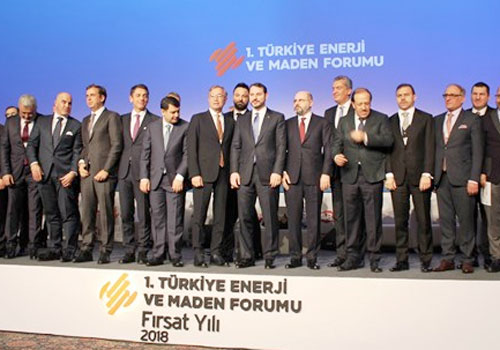